Android is an operating system for smartphones and tablets.

FIFA Sidekick Match Generator is a project I've started after some of my brother's friends asked me to develop it, and was my first foray into Android development. The app is a helper application for the game FIFA 14, where you can generate a random match between two teams using certain variables. After you've generated a match you'll have to manually change the teams in-game, but the app adds options the game itself doesn't have.

The app uses several libraries, almost all of them using the Apache 2.0 license. These include the switch widget, the ranged slide bar widget, the ViewFlipper indicator and the Facebook integration. 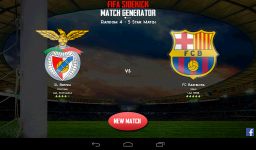